How these two brothers are building a seven figure business. Visiting them in their new office. 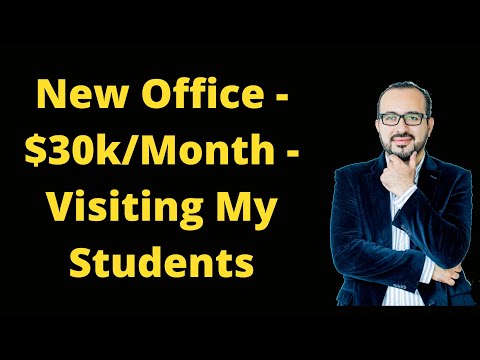 Hey, what’s up everyone. Oz Konar here with Business Lending Blueprint. Just wanted to shoot this quick video. I’m in my car right now and I’ve been driving for hour and a half and finally ended up in my destination. I’m in Northern New Jersey right now, just pulled into a parking lot and this is exciting because I’m here to visit one of my members, one of my student’s new office.

They started with the Blueprint not long ago. If you’re in the community, you keep seeing them posting about their successes. They finally move out of their home and they’re now in their office. And I interviewed Ray, one of the brothers, before and they said their goal is to reach $100,000 a month in revenue, which makes it a seven figure business officially, right?

So this is the first major milestone for them. They moved into this office and we had many people do that before but they were not in my close proximity, so I didn’t get a chance to come by and congratulate them in person. So since these guys are not too far from me, I wanted to come in in person and share this great moment with them. So I’ll just walk out and walk into their office. Just wanted to share this with you guys to see what is really, really possible if you find the right vehicle and if you follow the right system.

I’ll share more content with them, but honestly if you’re in my community, let this be something that encourages you to push every single day. If you’re not and you’re considering joining your great business, I highly suggest that you think about becoming a business loan broker.

If I were to be dropped into a city that I know nothing about, and all I had was a pen and paper, not even technology, this would be the best business. This would be the only business I would start because you’re offering something that people always need. Money, right? Whether they have the business or they don’t have the business, doesn’t really matter, you can help them if you have a good process, if you follow the system.

So just wanted to chime in and share that with you. So let’s walk out. I mean, I am a big fan of actually Ray’s car here. I’ll just show this to you real quick. Look at this beauty. Amazing car. So I’ll just go in and chat with them a little bit, okay. See what they’re up to.

All right, I’m going to share with you a couple of pictures we’ve taken during my visit at their office. It’s a really cool startup office. It’s two brothers working together. You’re seeing Ray here, he’s the one who’s really, really active at our community. You usually see him posting three to five times a week about the funded deals.

He’s holding the gong here. This gong was shipped out to those who fund deals through the Blueprint because of the help they get. This is George, his brother, and you see the flowchart that we ship out to every member. They said they owe a massive part of their success to following the flowchart and obviously our members have the same opportunity. Flowchart is pretty much, if you don’t know what it is, it’s a guide pretty much on how to communicate with your prospect of clients and how to match them to the right product, right?

So we have about a dozen different products and if you decide to be the broker and connect with the lenders directly on your own, without any middleman, you follow the flowchart. Flowchart literally tells you what to say, what questions to ask and how to respond back to those questions. It makes it super easy for you to qualify somebody and then at the end, tells you what to do next and submit that lead to the lender and have them fund a deal and you get paid. That’s how these guys built their business to, at this point, $30,000 per month.

A couple of things that we’ve talked at their office is tax strategies. Now they’re making money, they are actually moving out of this office to another office, a bigger office. And we talked about hiring tax strategies, changing their tax structure to a different structure. I was providing advice to them. I recommended my own accountant, so they’re in contact with them already. What the next step is, such as syndication. Syndication is huge in this industry and how that would work out and they had a couple of questions. We talked and they learned some things from me. I learned some things from them. So that’s the power of being a strong community. So we’ve decided that we’re going to stay in contact.

These guys, two brothers, they were running their businesses from different homes and just to be able to keep going every single day, they would get together one or two times a week, either at Ray’s house or George’s house. And now that they can afford it, they moved into an office. Now they’re moving into potentially a bigger office, adding more employees, doing some tax planning. That’s what it takes. And soon enough, you probably give them probably six, seven months, they’ll be pretty close to the 70, $80,000 mark. Then beyond that point, it’s not as difficult, right? So it is just, you have the systems and you have the employees in place and you can automate most of the things that you’re doing and you focus on the cash flow and the profitability of the business.