Hey guys, I just wanted to do a quick video of me unboxing my two comma club award. I received this box last night from ClickFunnels. This is an official confirmation on my acceptance to something called the Two Comma Club.

Over the years I worked with thousands of people helping them start, grow and scale their businesses. And a training program I started a year ago helping average individuals start a business on the side and be able to quit their jobs in a matter of two to three months allowed me to qualify for such an award. I’m posting this as a motivation for those who want to reach the same level , which is highly highly possible to accomplish this level of success and much more. 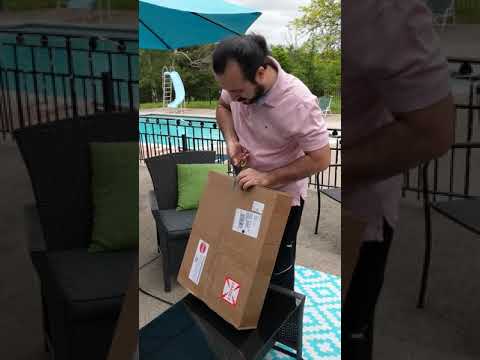 So what that is, is ClickFunnels is a marketing software that I use, and those who follow me and know me that I highly recommend ClickFunnels and all of my members use it. They have something called Two Comma Award. What that is, is any business or any person who reaches to $1 million in revenue through One Funnel or a part of their marketing campaign or a product they offer, they’re accepted into a community called Two Comma Club. And this is the award that you get and I didn’t know I was going to get it last night. And I wouldn’t have thought that I would ever see this in a million years, but they say that on the box before you open it, just record yourself unboxing it. So I just want it to do that quickly with you guys.

This is super exciting for me. For those of you who know me, I don’t get excited a lot. It takes a lot to get me super excited. But this is one of those things that I know I’ve been watching other people that I look up to, other business professionals and marketing professionals, coaches and consultants have on their desks for the past couple of years. But receiving the news that I qualify for that was just exhilarating. So you’re going have to carefully unbox this. And I’m going to tell you more about the award and how it worked out. So I’ve been running a marketing agency for a little over six years and we’re used to having clients on retainer and doing marketing for them. But I always recommend picking a specialty and focusing in a specific area in your market. So we helped many clients get results.

But about a year ago, I kind of got fed up and I wanted to start teaching how to start a successful business for average people. Maybe anyone who has in them and owned a business before, but they’re kind of fed up with their 9:00 to 5:00 crap and having a job and reporting to a boss. And if they have ever felt to be entrepreneurial, but they didn’t know how to go about it. So I wanted to create an opportunity. I didn’t create the opportunity, but I wanted to present and teach about an opportunity and instead of showing them how to be a business owner in general, I want to show them how to be a business owner, a specific segment of the market, which made a lot of money for me. So I wanted to help others get to that level, too.

And this was a little over less than almost 12 months, that one product and this has nothing to do with our agency. That’s only that training platform that’s been helping many, many people quit their jobs and build six, seven figure businesses resulted on receiving this award pretty much. And if you’re on my YouTube channel, you probably have seen a ton of my students, each massive success, quit their jobs and have the time freedom, the location freedom. And of course, the financial freedom that comes with that. They did a good job wrapping this. Can’t tell you how excited I am about this. ClickFunnels Two Comma Award. All right guys. With that, love you all. Take care.