How to sell Merchant Cash Advance

All right. If you want to increase your sales in merchant cash advance and increase the amount of deals that you fund, there are four rules that you need to follow. After working with hundreds of professionals from merchant cash advance industry, being the leading company in a lead generation into sales of merchant cash advance companies, we’ve seen a pattern as to why some companies succeed at a massive level, or some sales people always have the higher commissions or they fund bigger deals than the other ones. And we also had an opportunity to see why so many professionals in this area fail quite a bit.

Merchant cash advance has one of the biggest failure rates in the industry and we know exactly why that’s the case, so since it seems like you’re looking for a way to either close more deals, or you’re looking for a better sales script, or you’re trying to have an understanding as to what you need to do to close more deals consistently, I’m going to give you four rules that you need to follow. All right? So, listen up closely. 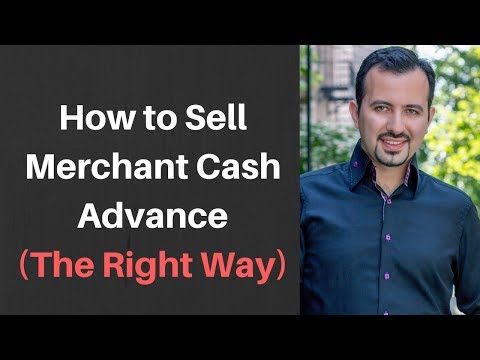 The first one is, you need to have a really solid understanding of your industry. I know it sounds common sense, but sometimes common sense is not so common. I came across so many sales people who really do not have a comprehensive level of understanding about merchant cash advance industry. I’m not saying you need to be a perfectionist and know the deal flow and how everything gets through it and what not, but you need to know it enough to be able to simplify it for your clients, because when a client gets to you, they might be in one of three different areas.

The first level is that they might not have no idea what merchant cash advance is. All they want is they want to get a business loan, so they don’t know what a SPA loan is, or working capital is, or equipment loan is, and merchant cash advance is, they might be at that level. So, for you to be able to take someone from that level to the point of feeling comfortable with you, so they say, okay, to a high interest rate advance, you need to know what you’re talking about, you need to be really clear on the process, what merchant cash advance is, what it is not, and be able to convey that in very simple terms and not make it complicated. And for that to happen at a deeper level, you need to have a good understanding of what business you’re in right now. Okay?

So that’s really important, so know you’re product, know you’re service, know the market that you’re in. Many sales people fail at that level because when they’re presenting the idea, they even make it complicated for themselves, how would the client feel about it.

The second type, many people make the mistake of pretty much using the same script for every type of situation, like under the first rule I talked to you about customers being at different levels, so each of those levels require a different type of approach and a script and also, how you’re communicating with these clients, or what avenue are you using to communicate with them is really important. Are you cold-calling them on the phone? Cold-calling them in person? Or you are reaching out to them as a result of a direct mail campaign your company did, or you did yourself as a company owner?

Is it coming through a live transfer, a cold email sequence that you do an email marketing and someone responds? So, you cannot just take your one script that you use and try to fit customers into that one, it just doesn’t work that way because you meet them at different levels, you got to meet them where they are so rule number two is, depending on the medium that you’re using to target your prospects, you got to have a customized approach, customized script, a customized set of questions. That’s number two.

Number three. Have a solid sales process in place. I know it’s almost cliché, you got to have a good sales system in place, but it is truly important. You can not always wing it. As sales people, that’s one of our favorite things to do when we get stuck, we kind of wing it until we cross the bridge and we get the deal done, but in the long term it doesn’t really serve you well. You need to be using proven scripts that work, that convert deals, and those scripts can be in the form of telemarketing on the phone, or when you’re in person, or when you’re doing an email follow-up, follow-through, or an initial introduction.

So, for every scenario, you got to have your script book, your sales book in place, and organizations that do not have that, they need to have that in place. If you’re managing a team, that’s pretty much how you manage it, if they’re following that system, they better get consistent results.

One of the biggest things that hurt merchant cash advance companies is the inconsistency. One month you’re funding maybe a million dollars, 10 deals, 15 deals, month two can drop down to two or three deals and you have no idea what the heck happened. Well, there are many factors, but one of the factors is your sales team or yourself if you’re selling, you’re not following a systematic sales process, you’re trying different things and you are kind of [inaudible 00:05:38] and in merchant cash advance, I’ll give you news, it is a relatively old industry and things have been figured out. There are companies that are funding deals like crazy. So, there is no need for you to go ahead and try to create your own sales system, it’s been done.

All you have to do is replicate what’s really working and just add your character to is, but just do it over and over and over again. It’s truly rinse and repeat. It’s got to get to a point that’s almost boring that you’re doing the same thing, but it can be as simple as that, but many sales people, many sales manager make it more complicated than it is. You got to have a system in writing and even you’re training yourself or your people, you got to stick to it, you can’t just keep playing around with that. So that’s number three.

So, whether you’re training someone, whether you’re selling yourself, you’ve got to put a lot of emphasis on follow-up. In merchant cash advance, it takes six to 10 touchpoints for you to take someone from cold to a point of funding your deal. So when you know that on the get-go, you know that when you call a lead once or twice, that’s just now enough.

Also, follow-up doesn’t mean that calling the same lead 15 times a day. You’re badgering them and disrespecting their time. That’s not a follow-up. Just like having your scripts, there’s a process of follow-up. When you’re making a phone call, there needs to be an email follow-up and if you’re system allows you to do it, there’s got to be a text message follow-up. It can be voice mail. So, you’ve got to switch it around and the other person should feel like you’re a professional, you know what you’re doing, you’re keeping your distance, but at the same time, you just keep reminding them why they need to work with you.

So, if you just go back and just and summarize it. Step number one, know your industry, know your product because you don’t know who you’re talking to. Somebody could be really knowledgeable, you got to be the authority on the phone or in person to be able to close a deal. Rule number two, understand, customize your approach based on the medium that you’re using, how you’re reaching out to these clients.

Number three, have a systematic sales process. Number four, have a systematic follow-up and follow-through process. So, if you get these four steps right, I can guarantee you that you’re not going to have much of a sales problem. You might have a lead generation or a marketing problem, but when you do get opportunities, you’re closing percentage will be super consistent, and you’re not going to have these dips and roller coasters every month.

We package it together.

Now if you do not have the resources to find these systems and gather together, if you do not have your sale book, if you do not have a follow-up, follow-through process, people who are just starting out in the industry, we do have a resource called merchant cash advance success blueprint. You’re going to see a link for that one. If this video answers your questions but you want all those resources at your arsenal, we put it together for you as a package, so you’re going to see a link at the bottom of this video, click on that, find out what it is inclusive of.

It’s pretty much created based on the pattern of behavior that we see throughout all of our clients because we work with hundreds of MCA, manager sales people, and MCA companies out there, we kind of know what works and what doesn’t work and we finally noticed that this industry needs this because there’s such a demand for the product itself, but many sales people are not really sales professionals, they just think that they can close harder and it’s just going to work out better, but there is a way for you to consistently make higher commissions. We package it together.

See the link below to see if it is something for you, but I highly recommend that you take a look at it and get it for yourself, for your company, for your staff, and whoever’s in charge of a sale, and I hope to see you on the other side. Take care.