I purchased the course and rather than having occasional $20000 to, $30,000 months and then dipping for a month or two, it’s pretty much steady growth now. 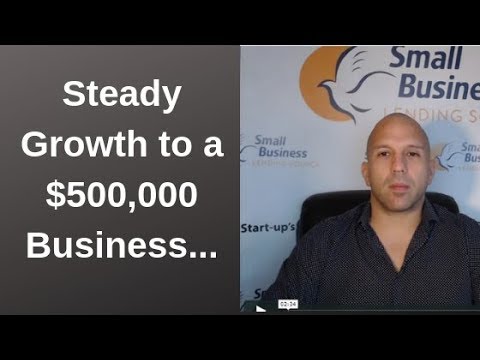 So once I purchased the course or really, rather than having, $20000 to, $30,000 months here and there, and then dipping for a month or two, I mean, it’s pretty much Steady growth now, , $30,000 each and every month.” “Hey everybody, Daniel Dias here, smallbusinesslendingsource.com. Wanted to give a brief testimonial in my experience and the business loan of Blueprint.

I’ve been a member of the Blueprint for about a year and a half now. Actually attended one of Oz’s live trainings. In regards to like marketing, guy’s genius. Everything in the Blueprint itself, it’s completely laid out for you, in regards to sales, marketing, the lenders. I mean everything is in there. I’ve been in the business lending space since 2013. I’m really just a student, and I’m always constantly trying to learn something new. I love marketing. When I came across this course online, seeing a YouTube video, and actually I think he actually reached out, which teaches in the course and the Linkedin marketing stuff, reached out to me a lot through Linkedin. Looked at the webinars, signed up. Since then, I’ve really been able to grow revenue wise, I’m a small shop. I do about a quarter of a million a year.

Really been able to create a consistent bill flow. I mean that was probably my biggest problem before. And I know a lot of smaller ISOs, that’s their problem as well. A lot of up and down months. So once I purchased the course or really, rather than having,$30,000 months here and there, and then dipping for a month or two, I mean, it’s pretty much steady now, $30,000 each and every month. So, that’s been my biggest benefit. If you’re newer to the industry, and you follow the steps that are in the course, and you get support from the group, there’s really no reason why you won’t be able to succeed.

So, if you’re on the fence about moving forward, and you’re looking for that next opportunity, and really everything’s been laid out for you. There’s literally hundreds of students that are in the Blueprint. There’s a lot of different testimonials, a lot of videos, and we we’re not actors. I mean, we’re actually we’re out here where we’re doing business loans and we’re making a great living for our families. So, if anyone has any questions at all, I’m always open, so you can feel free to reach out to me. Daniel Dias, I’m on Facebook, or you can look me up on LinkedIn at smallbusinesslendingsource.com. Thank you.” #businesslendingblueprint #bestbusinessidea #theblueprint